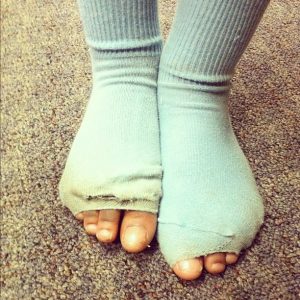 Instead of putting seeds into the bag, running around in socks is how they’ll collect the seeds – directly from nature. Depending on your location and where you want to do your “collecting,” you can decide whether to let the kids just wear socks or whether you want to put the socks over their shoes. If you’re just running around your yard or neighborhood, I suggest the former. If you want to take a long hike, I’d suggest the latter. Both are pretty fun for kids!

Start by having the kids put on a pair of old socks (on their feet or over shoes). Next, since you want the seeds to stick, get the socks wet. Have the kids step in a bucket of water or just spray their feet with the hose. Once their socks are wet, set the kids loose!

Encourage them to explore wooded areas, under trees and bushes and other low traffic areas. Make sure they squish their feet into the ground to pick up as many seeds as possible. Step on dandelions, shuffle through fallen leaves, walk gently through the garden. Finally, have them find a muddy area to squish their feet in! This will pick up a bit of dirt to help the seeds grow.

When the socks are nice and filthy, take them off and place each one in a plastic bag. Tape the plastic bag to a window that gets a good amount of daily sunlight. If the socks feel dry, add a small amount of water. Now all you have to do is wait!

Within a few days, you should notice some sprouting. By two weeks, your socks should have some serious blooms.

If at first you don’t succeed, try it again.

Growing your socks is such a fun and easy science project for kids. It teaches them all about germination and what plants need to grow. You can experiment by growing socks from various locations to see the differences in the types of plants you get. If you want to go a step further, try identifying the sprouts you’re growing and figure out what each plant will look like when fully grown.

That is the Question!

Have you ever found an egg in your refrigerator and wondered if it was cooked? Although eggs drastically change inside their shells when cooked, it is still remarkably difficult to distinguish a cooked egg from a raw one without cracking it open. In this activity, you will find out how physics can help you tell the difference!

The goal of this activity is to find a test that can identify whether an egg is cooked or raw without cracking the shell.

What are your ideas?

Does one look different, smell different, or seem heavier than the other?

Does this difference distinguish the raw from the cooked egg in this pair, too? If you found a difference that held up for both pairs, do you think it can differentiate all cooked eggs from raw eggs? Why do you think the differences occur?

When you boil an egg, the inside becomes solid. It does not change how the egg looks or its odor, so you cannot see or smell the difference. Shaking a raw egg does not make a sloshing sound because the liquid in the egg is contained in a membrane and only a small air bubble is present. Neither egg is hollow, so tapping it does not produce a clear audible difference.

You can tell the difference between a cooked and a raw egg by spinning it: a cooked egg is easier to spin. As the inside of a cooked egg is solid, the particles inside cannot move around relative to each other or the shell. The whole egg moves in unison. When you spin the cooked egg by twisting its shell, the hole inside moves along with the shell. In a raw egg, the inside is still liquid. The particles that make up the liquid can slide and move around relative to each other and the shell. When you spin the shell of the raw egg, the liquid inside does not start spinning right away—it needs some time to ”catch up,” and friction between the shell and the liquid slows down the spinning motion. Since it is easier to balance an egg on its tip by spinning it faster, this also makes cooked eggs easier to balance than raw eggs. It also helps that the inside of the cooked egg is less wobbly since it does not move around (its center of mass is fixed).

SUITABLE PLACE:
At the table with access to sink and water. (Or out in the rain?)

MATERIAL
Two identical glasses for each child, a teaspoon of metal and preferably several small jugs of water, which the children themselves can pour out.

VARIATION
Feel free to do the same activity in other words, such as higher, lower and equally high.

Three bears should sit on a sofa. In how many different ways can it be solved?

Let the children document themselves on paper. The children can then be paired and compare their solutions.

The task can be performed:

To adapt the problem

A digital variant of the task is available in the CombiBears application, www2.kau.se/jorrbomm. Teachers and students can now choose how many seats should be on the sofa and how many bears should sit there. After each completed combination, students can save their solutions by ”taking cards” and finally comparing the cards systematically to see if they have found all the combinations or not.